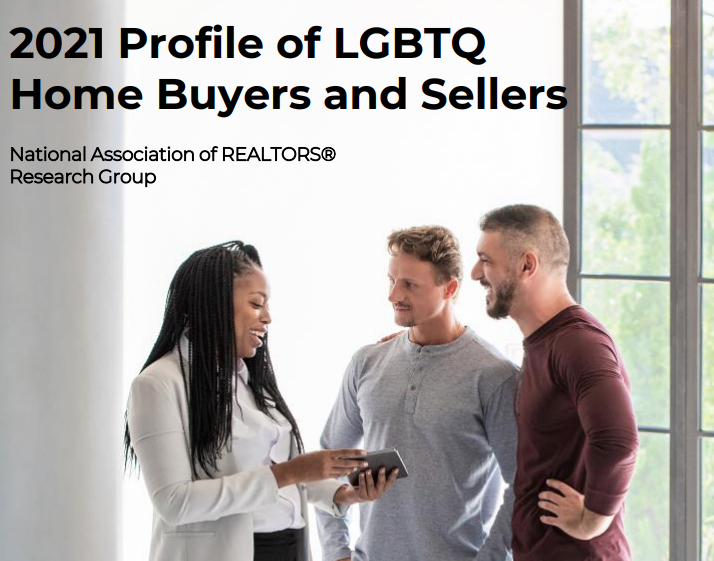 WASHINGTON (June 9, 2021) – Home buyers from America’s LGBTQ community purchase older, smaller and less expensive homes than non-LGBTQ buyers, according to the 2021 Profile of LGBTQ Home Buyers and Sellers released today by the National Association of Realtors®. Over the past 5 years, homes bought by LGBTQ buyers were 170 square feet smaller and 15 years older, typically, than those purchased by non-LGBTQ buyers.

“Understanding how buyers navigate the housing market is essential to Realtors®,” said Jessica Lautz, NAR’s vice president of demographics and behavioral insights. “This report details the impact of the housing affordability challenges on LGBTQ buyers, who typically had lower household incomes and were more likely to be purchasing more affordable homes.” NAR first added a question about sexual orientation to its annual Profile of Home Buyers and Sellers study in 2015.

LGBTQ buyers expected to spend 10 years in their new home, five years fewer than non-LGBTQ buyers. While there were no significant differences between the groups when it came to home types purchased, comparing LGBTQ home sellers to non-LGBTQ home sellers showed that LGBTQ sellers were less likely to sell a detached single-family home (69% vs. 81%) and more likely to sell a townhouse/row house (11% vs 6%) or an apartment condo (8% vs 4%).

Characteristics of Buyers and Sellers

Since 2015, the percentage of LGBTQ home buyers and sellers has remained steady at 4%, with 51% identifying as male and 40% identifying as female. Eight percent identified as non-binary, gender-nonconforming, or third gender.

“All Realtors® are obligated by NAR’s Code of Ethics to provide equal professional service without discrimination based on sexual orientation or gender identity,” said NAR President Charlie Oppler, a Realtor® from Franklin Lakes, N.J., and the CEO of Prominent Properties Sotheby's International Realty. “As we recognize Pride Month and Homeownership Month this June, it’s important to continue the pursuit of equal housing opportunities for everyone. Our communities are stronger when we are more inclusive.”

The data used for this report is an aggregation of all of the responses from those who specified sexual orientation from the 2015 through 2020 NAR Profile of Home Buyers and Sellers survey, totaling 41,950 responses. Just over four percent of all respondents in the survey – 1,574 total individuals – identified as LGBTQ. For more information on NAR’s 2021 Profile of LGBTQ Home Buyers and Sellers visit https://www.nar.realtor/research-and-statistics/research-reports/profile-of-lgbtq-home-buyers-and-sellers.

The National Association of Realtors® is America’s largest trade association, representing more than 1.4 million members involved in all aspects of the residential and commercial real estate industries.