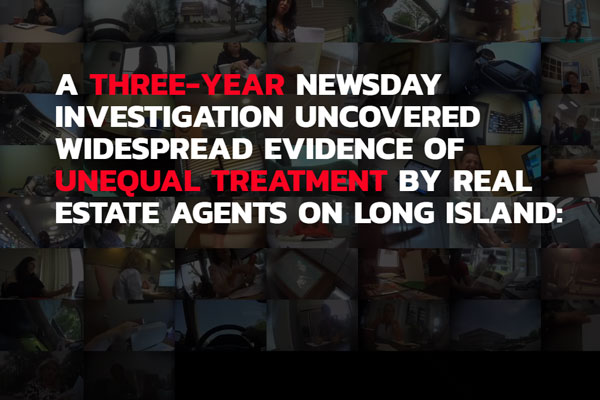 What happens when white and minority prospective homebuyers seek real estate agents to help them find houses on Long Island?

More than 50 years after President Lyndon B. Johnson signed the federal Fair Housing Act to prohibit discrimination in housing, this remains a core question for one of America’s oldest, most populous and most segregated suburbs.

The answer should be equal treatment for all by real estate agents and equal access for all communities.

In the decades after World War II, Long Island experienced explosive growth as its communities swelled with returning veterans investing in homes and establishing roots. But opportunities were not the same for everyone in what was also an era of racially exclusive covenants and blockbusting tactics that separated communities along color lines.

Today, even though ours is an increasingly diverse region, the lines of separation stubbornly persist. We remain a Long Island Divided.

Real estate agents are central to homebuying and so important is their role that their training is specified by New York state. They are licensed by the state and their industry is regulated by federal and state agencies. They are expected to uphold federal, state and local laws requiring equal treatment for all and equal access to all communities. Federal law specifically protects homebuyers from discrimination based on race, color, national origin, religion, sex, familial status and disability.

Enforcement agencies rely on undercover tests — which reveal sometimes hidden inequalities in treatment — to investigate whether real estate agents deny equal opportunities in home buying. Posing as buyers, white and minority testers make identical requests to agents for help finding houses. The results are then scrutinized for evidence of fair housing violations such as “steering” testers to communities.

So we undertook the task in a three-year investigation that is one of the most extensive ever conducted by Newsday.

Newsday engaged the Fair Housing Justice Center in Long Island City, an organization with the nation’s most extensive paired-testing experience, to help structure and implement testing and train testers. We engaged two nationally recognized experts in fair housing standards to analyze the results of our testing and then undertook a rigorous and thorough review of the findings.

We then notified all agents and agencies that were tested. If both experts found evidence of unequal treatment, Newsday contacted the real estate agencies and agents involved to make available a review of video we recorded of interactions among testers and agent and maps of listings offered. We invited them to meet with our reporting team to ask questions and to seek their reactions and responses. The Newsday team then reviewed the cases based on responses from agencies, agents and their representatives.

Our digital presentation provides readers access to our testing videos of interactions in cases where experts saw evidence of fair housing violations, mapping of listings when cited as relevant by experts, real estate agent and agency responses and the experts’ explanations.

Newsday shares the findings with you our readers to help illuminate an American ideal that is powerful in its simplicity — everyone deserves a fair shot at making a better life. That is a cornerstone to creating a stronger, more inclusive and more tolerant place to live for all of us.