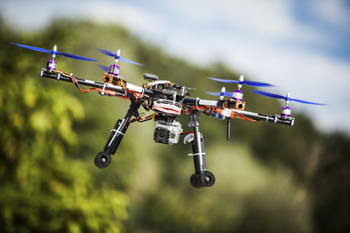 In response to NAR members' growing interest in drones, or unmanned aircraft systems ("UAS") as they are referred to by the Federal Aviation Administration ("FAA"), this FAQ has been assembled to help answer some of the most frequently asked questions NAR receives regarding the legal and regulatory landscape of UAS, and a real estate professional's ability to use this emerging technology.

2) How do UAS typically operate?

UAS flights are typically short in duration and flown at low altitudes in order to gather only the desired images or information related to a specific property or location. Most UAS fall into what is referred to as the micro UAS category, which means the UAS weighs 4.4 pounds or less. UAS operations are typically brief and more affordable than manned aircraft operations, which make UAS well-suited for use by the real estate industry.

3) May I use a UAS to take aerial images of my real estate listings?

You may use a UAS only if you have received a Section 333 waiver from the FAA. Current FAA laws and regulations generally prohibit the commercial use of UAS, which includes for the purpose of real estate marketing.

4) May I hire someone else to operate a UAS to take aerial images of my real estate listings?

5) Has NAR taken a position on UAS?

Yes. On November 10, 2014, the NAR Board of Directors approved the following official policy statement on unmanned aerial vehicles:

The National Association of REALTORS® supports efforts to create new federal regulations to allow for the future commercial use of unmanned aerial vehicle technology by the real estate industry.

The National Association of REALTORS® is committed to working with the Federal Aviation Administration, and any other relevant federal agencies, during the regulatory approval process. The National Association of REALTORS® will continue its ongoing efforts to educate REALTORS® about the current and future regulatory structure for the safe and responsible operation of unmanned aerial vehicles.

6) Are there any exceptions to the prohibition on the commercial use of UAS?

Yes. The FAA Modernization and Reform Act of 2012 provides the FAA with the ability to issue Section 333 waivers, which grant authorization for certain unmanned aircraft to perform commercial operations on a case-by-case basis.

8) Does the Section 333 waiver require the petitioner to have a pilot's license?

Yes. An FAA-issued pilot's license is a required element of successfully obtaining a Section 333 waiver.

9) How long does the Section 333 waiver process take?

The FAA advises that Section 333 petitioners should allow up to 120 days after submission for a decision to be made on a petition of exemption. However, in March of 2015, the FAA made certain procedural changes that often result in a faster approval time. Since these changes were implemented, the FAA has been approving an average of 50 Section 333 waivers a week.

10) Are there any proposed regulatory changes to allow for the future commercial use of UAS?

Yes. The FAA Modernization and Reform Act of 2012 charged the FAA with integrating the commercial use of UAS into national airspace. In February 2015, the FAA took the first step in doing so, and issued a Notice of Proposed Rulemaking on the Operation and Certification of Small Unmanned Aircraft Systems ("Rule"). You can find a summary of the Rule on the FAA's website at:www.faa.gov/regulations_policies/rulemaking/media/021515_sUAS_Summary.pdf.

11) When is it anticipated that the Rule will become final?

The FAA is working diligently to consider the over 4,000 comment letters it received during the Rule's comment period. While the typical timeframe for a proposed rule to become final is sixteen months from the time a rule's comment period closes, the Rule has the highest priority within the FAA. The FAA is determined to move forward as quickly as possible, and a final rule could be issued as soon as August 2016.

12) What if I want to use UAS before the Rule becomes final?

13) Is insurance available for UAS operators?

14) What can I do to limit my legal liability when hiring a UAS operator?

You should request that the UAS operator indemnify you against any action, suits, damages, losses, costs and expenses (including, without limitation, attorneys' and fees and costs) arising from the UAS operation or the use of the related UAS images.

15) Where can I find a list of individuals and companies that have obtained a Section 333 waiver?

NAR maintains a list of the individuals and companies specific to the real estate industry that have been granted Section 333 waivers, available on REALTOR.org:www.realtor.org/articles/list-of-faa-approved-drone-operators-available-....

The FAA's website also contains an up-to-date list of all of the individuals and companies that have been granted Section 333 waivers:www.faa.gov/uas/legislative_programs/section_333/333_authorizations/.

16) Could I be legally liable if I hire a photographer who does not have a Section 333 waiver to operate a UAS for commercial purposes?

The FAA's mission is the protection of national airspace and the safe operation of aircraft. As such, the FAA's enforcement efforts with respect to UAS are focused on the UAS operator and the safety of the flight. Therefore, an impermissible or carless or reckless operation of a UAS could result in an FAA enforcement action against the UAS operator. However, beyond FAA enforcement, a real estate professional could be the subject of legal risk under state law if an individual is injured or an individual's privacy or property rights are infringed upon as a result of the UAS operation.

17) Where can I report any suspected improper use of a UAS?

Any concerns regarding the unauthorized commercial use or unsafe operation of a UAS can be directed to the FAA or to local law enforcement authorities.

18) Does use of a UAS without a Section 333 waiver constitute a violation of the REALTOR® Code of Ethics?

The REALTOR® Code of Ethics does not address this type of conduct. While REALTORS® are encouraged to always abide by local, state, and federal laws, it is not a REALTOR® association's role to adjudicate whether a REALTOR® has violated a local, state or federal law.

19) What duty does an MLS have to remove UAS-obtained images in a listing that were obtained without a Section 333 waiver?

An MLS does not have an obligation to investigate or to remove UAS-obtained images in listings where the MLS suspects that such images were not taken pursuant to a Section 333 waiver. An MLS may create a policy prohibiting MLS participants from placing images on the MLS where such images were taken in violation of the FAA's prohibition on the commercial use of UAS. Before creating a policy on this issue, an MLS should consider its ability to consistently police and thoroughly investigate whether such images are compliant with FAA rules and regulations.

20) Where can I find additional information about UAS?

There are many valuable UAS resources available on REALTOR.org, including:

REALTOR.org page dedicated to UAS, providing legal and regulatory updates, as well as other relevant UAS news and information:

"Drone Fever: Getting Permission to Fly in the U.S." webinar, hosted by the National Association of REALTORS® and presented by Hogan Lovells:

"Window to the Law" video on the FAA's February 2015 Notice of Proposed Rulemaking on the Operation and Certification of Small Unmanned Aircraft Systems:

The FAA's website is also a great resource for UAS information:

Information about the "Know Before You Fly Campaign", a campaign dedicated to educating prospective UAS users about the safe and responsible operation of UAS, is available here: